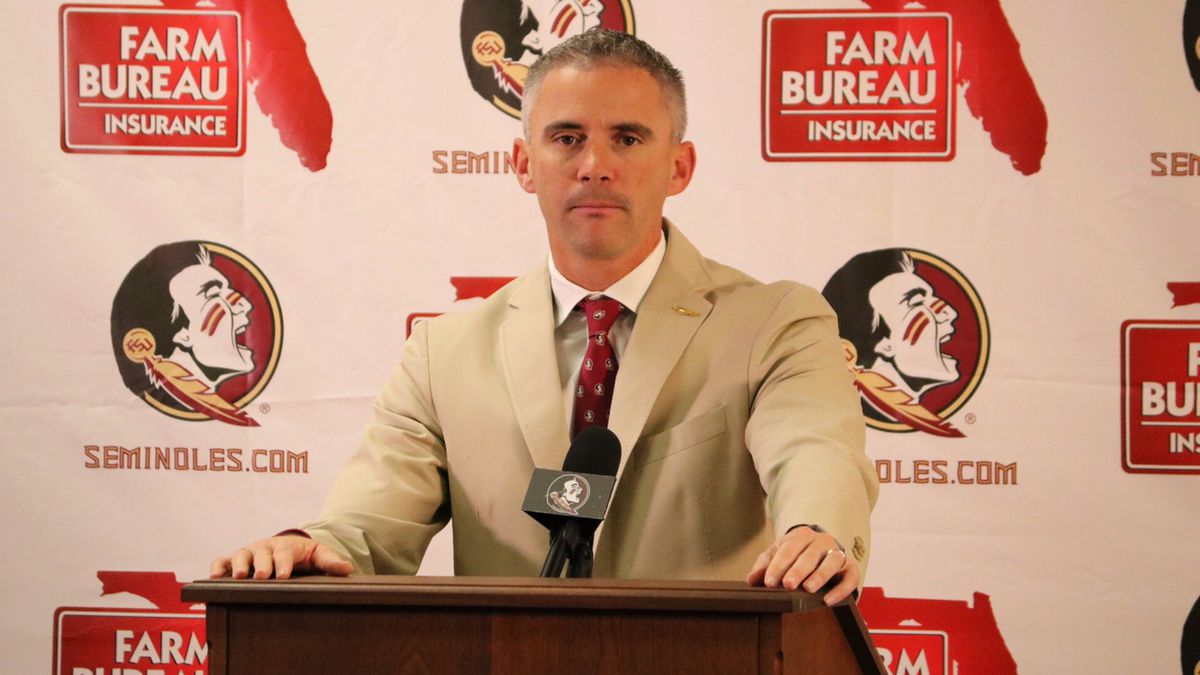 With Early Signing Day and Bowl Season wrapped, the dust looks to be settling a bit with the exception of Traditional Signing Day next month and the ever-present Transfer Portal. We know that there are glaring deficiencies on the current FSU coaching staff and general hand-wringing amongst us – the fans, alumni and boosters when it comes to the rest of the staff. Let’s take a look at the current staff with value shown in a completely subjective win-share value: (on-field staff is being analyzed below)

With the circumstances that he walked in to (both football and Covid related), and the timing of his arrival with regard to the ESD Era, Mike Norvell is imprinting on this program a hard-nosed philosophy coupled with a feeling of brotherhood in the locker room. There are obvious hiccups (Jax State) but also, playing above expectation (UNC 2020, 2021). Given two more years and some adjustments to the staff, he might just be the right guy for the job.

Offensive Staff – Alex Atkins is showing to be the real deal in more ways than one, we’ll see how the youth develops and what kind of chops he has in formulating the overall offensive gameplan moving forward though. David "YAC" Johnson has done nice things in developing the RBs in the room (Treshaun Ward for example), but his presumed sweet-spot of recruiting Louisiana is showing more smoke than fire. Feels 2022 will be his make-or-break season. The positional coach environment (below) leads me to believe he will continue on in his role of RB Coach, though the Recruiting Coordinator role may be moved to a new coach. With Chris Thomsen, this is very much a take-it-or-leave-it spot. Deputy Head Coach doesn’t seem to be a quantifiable position, but the TEs haven’t turned in to either significant run-blocking contributors nor have they developed in to legitimate downfield threats. The latter can be attributed to FSU QBs not having time to read thru progressions or comfort to throw over the middle, but the results simply aren’t there in an offense that Norvell has historically leaned on his TEs for production. I’m not entirely sure that this is a coaching position that is being actively looked to for an upgrade or movement. With Tony Tokarz just taking over as QB Coach for the departed Kenny Dillingham, there is no real basis to grade. The bearded elephant in the room – Ron Dugans. We all wanted him to succeed badly as the former FSU great returning home with supposed recruiting chops developed in Miami. Being harshly blunt – the results have come nowhere close to expectation. Even with the aforementioned limitations created by almost no pocket time for the QBs, FSU WRs are simply not developing in to dependable pass-catchers, downfield blockers or those that can win one-on-one battles consistently enough. Looking at his WR recruits while at FSU: Bryan Robinson – 4* - transferred after two unproductive seasons, Malik McClain – 4* - moments of quality play his true freshman season – lost him/then re-committed, Ja’Khi Douglas – 4* - assisted by YAC – showing promise as a gadget player lined up in the backfield, in motion or in the slot. Those are his big hits while at FSU. The results do not befit the expectations. Contract expires in January, look for a replacement to be hired.

Defensive Staff – After 2020, many questioned whether Adam Fuller was ready for Power 5 football as a Defensive Coordinator. While there are still some questionable calls, the 2021 FSU defense looked much more capable despite the dearth of quality LB play. With transfers and projected/hopeful development of young players, 2022 will be a telling year with this defensive style and execution. Bringing in Jermaine Johnson II and Keir Thomas will make any DE Coach look amazing, but John Papuchis has some "show me" coming up in 2022. Needing to see how Derrick McLendon, Shambre Jackson, Dennis Briggs, Patrick Payton, Byron Turner and George Wilson have developed along with routine Special Teams gaffes needing to be improved greatly, JP’s groups will be under the microscope all season long. The Nole-Blooded, FSU Lifer Odell Haggins has been under fire recently, however, the FSU rush defense ranked 55 nationally with 144.6 yards allowed per game and 3.63 yards allowed per attempt. Given that FSU played from behind often in losing 7 games with teams rushing the ball roughly 40 times per game, the DTs were under duress frequently. It appears as though the DT rotational players will all be back in 2022 with an infusion of a bulked up TJ Davis and Joshua Farmer. The question with Uncle Odell is recruiting chops. Under the Fisher regime, Haggins carved a niche in the DMV area, routinely landing 5* talent out of Virginia and Maryland such as Ronald Darby, Lavonta Taylor, Derrick Nnadi, etc., but his recruiting area has been whittled down to the I-4 corridor so there may be a more pointed reason as to recruiting shortcomings. His contract is expiring this month, if he is moved to an off-field role be it ambassador or advisor, there may be some intriguing options to bring in from outside the Tribe. A factor in allowing the DL to have an effect on the game is quality coverage on the backend, and when you have blue-chip players peppering the two-deep, Marcus Woodson’s job should be easy. The Noles’ pass defense was ranked 56th in FBS with a 131.12 pass efficiency score. In 12 games, the FSU defense faced 397 passes thrown, allowing an average of 233 yards per game in the air. While these are pedestrian numbers, Woodson’s unit was tied for 25th nationally with 14 passes intercepted. The development of Omarion Cooper and Kevin Knowles II were revelations, Jarvis Brownlee has moments of frustration but has developed in to a no-doubt P5 starting CB. What needs to be seen is some kind of consistency with Travis Jay, improved Safety play and continued recruiting prowess (no, I’m not going to drop that name here, carry on.) There is no doubt that Marcus Woodson has a home here until someone poaches him for a P5 Defensive Coordinator position, unless 2022 proves to be a downward trend for Adam Fuller and that’s Woodson’s job in my mind if/when that happens. With Chris Marve departing to Blacksburg, Mike Norvell moved Randy Shannon in to an on-field role as Linebackers Coach. While Coach Shannon has pedigree as a 20+ year P5 coach, a lot of the judgment here will revolve around his ability to use his ties to the Miami area high schools. We’ll hold out judgment here, but 2022 will show his abilities as the LB group has, by and large, been a major sore spot for the FSU defense since the late Fisher years.

What you can glean from the previous paragraphs is that there is definite room for growth in multiple rooms – namely WR, DL and LB. One of those may have already been addressed with Randy Shannon. The other two… let’s take a look at some possibilities. (Disclaimers: some salaries aren’t public knowledge, I’ve tried to move on from out-of-reach possibilities such as JuJuan Seider, Holmon Wiggins, Tony Alford, etc. and ties to Norvell and related coaching trees will be noted.)

Kenny Guiton – Current Arkansas State WR Coach, brief history as a G5 WR coach, seemingly affordable $300k/year salary to bump up. Arkansas State ranked 11th in FBS 313.9 yards per game (some of those with James Blackman throwing passes) – they were also 20 spots ahead of FSU with 12.15 yards per completion. At 30 years old and an affordable (not my money) salary, this could be the type of Mike Norvell hire that falls in line with Alex Atkins when he hired him away from Charlotte.

Mack Leftwich – Currently QB Coach and passing game coordinator at Incarnate Word. This may be a slight stretch given his relative fresh exposure to NCAA coaching, however, UIW ranked 5th in FCS in 2021 in passing offense at 360 yards/game (with 48 TDs to 10 INTs). He’s a coach’s son and played four years at UTEP. Leftwich may be more of an Offensive Analyst than on-field hire, but someone to keep an ear open for.

Keenan Bailey – Currently Quality Control Coach – WR at Ohio State. Native of Pompano Beach, graduated from Notre Dame and has apprenticed under Brian Hartline. This could follow along with the Kenny Guiton thoughts above where Norvell takes him under his wing with the premise of bigger things down the road.

Darrell Wyatt – Current UCF WR Coach with extensive coaching background. This is the total opposite of the previous three candidates. Wyatt has strong ties in the Big XII footprint, including Texas. He developed some high quality WR at Texas and may be the opposite of what was expected of Ron Dugans – developer of talent while not a burner on the trail.

Desmond Lindsey – The Mike Norvell Tree candidate! Lindsey is currently the WR Coach/Passing Game Coordinator at Southern Miss. Previous to that he spent 2 years as RB Coach at Arkansas State. He did, however, spend 2018 coaching WR at Memphis under Norvell. Lindsey went to West Alabama, has published a book on defeating press coverage, went thru the Bill Walsh NFL Coaches Fellowship Program (twice) and has some strong ties thru Alabama, Mississippi and Arkansas. This would be my choice, honestly.

Joe Seumalo – The current San Jose State DL Coach has obvious ties to the western half of America which would be a welcome addition with the departure of Kenny Dillingham. He has put a good handful of players in to the NFL and CFL and has loose ties to Norvell, having coached under Todd Graham at ASU in 2016. Might he be willing to retire in FL like oh-so-many others do annually?

Paul Randolph – The Gainesville, GA native is currently coaching the Defensive Line at Texas Tech. Prior to that? He was the DL Coach at Memphis under Norvell and the DC/Associate Head Coach at ASU with Norvell. Oh, he was at Pitt and Tulsa with Norvell too. His all-time commits from 247 appear to shadow the geography of where he’s been employed, but being from GA and having gone to school at Tennessee-Martin, you’d have to think there’s success to be had if he came on board. (My preference for DT/DL Coach hire.)

Marcus Bell – This is a bit of a stretch, but the current Memphis Director of Community and Tiger Alumni Relations had an NFL career and coached with/under Paul Randolph. He’s not long in the tooth and has some Director of High School Relations time under his belt. This may, honestly, be a scenario where he comes aboard in a similar role if Norvell decides to promote/move from within – Kenyatta Watson, Cortez Carter, etc.

Kwahn Drake – Currently coaching the defensive line at Kansas while coordinating the defensive run game, this is a creative candidate that I feel would be a Norvell Special. Was an Offensive Analyst under Norvell in 2016 at Memphis but is from New Orleans (St. Augustine tie-in there) and has moved up the ladder methodically. Again, this would follow the Alex Atkins hiring philosophy – young, hungry, good recruiting footprint. (This would be my favorite behind Randolph.)

This is obviously not a very extensive list, but I wanted to nail down some possibilities that have affordable for FSU salaries, ties to the Norvell Tree and either positional coaching success or potential for strong recruiting success. By all means, if you have concrete names linked to the position, shoot your shot below!