Sixth ranked Florida State has just two losses on the season, unranked Florida has fourteen losses. The Seminole have won all six weekend series, the Gators have one only one, Miami four weeks ago. FSU has a strength of schedule around 180 while the UF has had one of the toughest. But with everything considered the Noles are playing at a totally different level than UF right now and they hope to claim the season series tonight in Jacksonville.

Share All sharing options for: Seminoles and Gators, Part Deux

The Seminoles are riding high coming off a great series that saw them take 2 of 3 games from top ten ranked Georgia Tech while the Gators lost their second consecutive SEC series on the road in Vanderbilt. As mentioned earlier the Noles can claim the Sunshine Showdown series with a win tonight after defeating UF in Gainesville a couple weeks ago for the first time since 2007.

The Noles once again have an elite offense and currently rank 11th in scoring, 4th in on-base percentage, 28th in slugging percentage. Florida continues to struggle finding any type of identity other than offensively crippled and are ranked 174th in scoring, 166th in on-base percentage, 143rd in slugging percentage. In 18 less plate appearances the Gators have struck out roughly the same amount of times (109 to 112) but have walked 71 less times than the Noles. Florida does have homerun threats as they have hit 16 homeruns to Florida State's 14 but they are 221st in the NCAA with only 27 doubles while the Noles are 1st with 62 two baggers.

Florida State has received contributions from many guys in the lineup this season, veterans and newcomers. Returners Seth Miller, Jose Brizuela and Stephen McGee have all been huge this season as they all carry a batting average over .330, an on-base percentage over .470 and have a .500 or higher slugging percentage. Not a single Florida batter can make that claim. Freshman DJ Stewart (.278/.379/.472) is coming off an ACC Player of the Week award while JUCO transfer Marcus Davis (.300/.410/.600) is still an extremely tough out every single plate appearance. The Gators lineup isn't completely inept, UF is led by a trio of sophomores Justin Shafer (.330/.380/.526), Casey Turgeon (.303/.385/.424) and Zach Powers (.278/.391/.444). These three make up the top of the lineup and pose the only real threat, if the Noles can avoid these hitters coming up with runners on base they should be able to keep the Gators in check.

The Noles come in to this game with the 7th best ERA in the nation, 24th in H/9 and 52nd in K:BB ratio while the Gators ERA ranks 182nd nationally, 140th in H/9 and 90th in K:BB ratio. The Florida State staff has room for improvement and has not pitched as well as its ERA would indicate, they still allow too many walks and against the only excellent offense they have played they had a K:BB ratio under two. Fortunately the Gators are far from having an excellent offense and the first time these two teams faced off FSU allowed only 5 hits (all singles), walked only 2 and had 7 strikeouts. 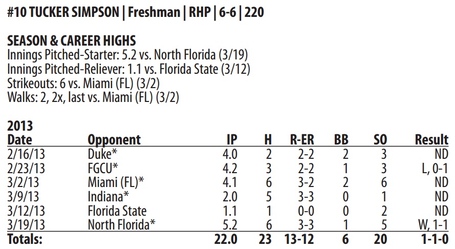 The freshman is making his 6th start of the season. Tucker began the season in the weekend rotation but after four starts lasting less than five innings he was removed and has since seen work in the bullpen with a midweek start last week where he had is career best outing.

The sophomore for Florida State has been arguably the best pitcher on the team this season and regardless of tonight's outcome should be in the weekend rotation against Virginia Tech. Four quality starts and a ridiculous 26 to 3 strikeout to walk ratio should be able to keep the Gators in check just as he did two weeks ago.

Head to head the Seminoles have the obvious advantage in starters. Tucker Simpson has shown that he struggles against even the weaker offenses while Luke Weaver has dominated all levels of competition, even though the level of opponent he has faced still calls for some uncertainty.

Tonight's game is televised and can be viewed on Sun Sports. Homers Gene Deckerhoff and Nick Belmonte will be broadcasting meaning that there should be a lot of inaccuracies and mispronounced names. If you are unable to watch or out of the viewing area we will have your play-by-play right here.

All the records and numbers make this game appear like a huge mismatch. In reality the Noles have faced only one team this season who seems to be on pace to make the postseason tournament while 18 of the Gators 25 games played appear to be against teams who are track to make the playoffs. With that this game could obviously go either way but with the way the two teams have been playing lately the edge obviously goes to Florida State.

See everyone back here at 6PM.