Video looks much better if you select HD.

In anticipation of Florida State's huge game at Clemson Saturday, Tomahawk Nation is reviewing Clemson's previous games in 2013. First up is Clemson's victory against Georgia, a 38-35 win that cemented Clemson's place in the CFB spotlight. We'll link relevant articles for you, as well as the entire game footage, should you want to watch.

Georgia outgained Clemson by about 25-percent per snap, and lost because of turnovers and a botched field goal, mostly. Clemson did drop SIX balls, which is a ton, and this would probably have not been as close if not for the drops. 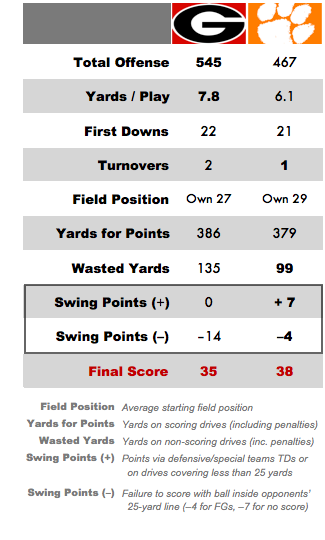 I've noted this elsewhere, but the turning point in the Bulldogs' loss had nothing to do with talent, or scheme, or anything but random buggery. Trailing 31–28 early in the fourth quarter, UGA lined up for a chip-shot field goal to tie, only to come away empty after a botched snap/hold on the attempt. From there Clemson scored again to go up by 10—catching another break on the way when a bad snap of its own was negated by a false start penalty—and just like that the game was effectively out of the Bulldogs' reach. Fittingly, in a back-and-forth game that was all about holding serve offensively, the final margin between moving onto the short list of championship frontrunners and being relegated to the on-deck circle was, yes, three points.

In the "Swing Points" category, Georgia is also docked for giving away potential points on a first-half turnover in Clemson territory, instantly negating the Tigers' only giveaway by throwing an interception on the very next play. (The INT is reflected as –7 against UGA in the box to the right, as is the botched snap, although technically the former came with the ball at the Clemson 30, not inside the 25.) Between those two opportunities and a fumble that set up the Tigers for a 16-yard touchdown "drive" in the second quarter, that amounts to a 17-point swing on three very avoidable errors alone.