Explaining what pattern matching is and how it works, in English.

Interest in Nick Saban's Alabama defenses has been high among the FSU football fan base ever since it was announced that Jeremy Pruitt would be coming from Tuscaloosa to Tallahassee and bringing a heavy dose of Saban principles with him. While there are a number of things that distinguish Saban defenses from others, probably the biggest difference is the heavy use of pattern reading or pattern matching techniques in pass coverage. More specifically, it's his ability to teach the concepts to college players. Most modern defenses use these techniques to some extent, but Saban's defenses take them to a much higher level of detail and refinement.

What exactly is pattern reading? The simplest explanation would be that pattern reading is a rules based system that dictates defenders' coverage responsibility based on receiver distribution. It is primarily employed in the context of zone defense, though there are related concepts like "banjo/switch" coverages that are employed in man-to-man defenses. To understand how pattern matching defenses differ from traditional zones, first we need to be clear on how those traditional zone defenses operate. 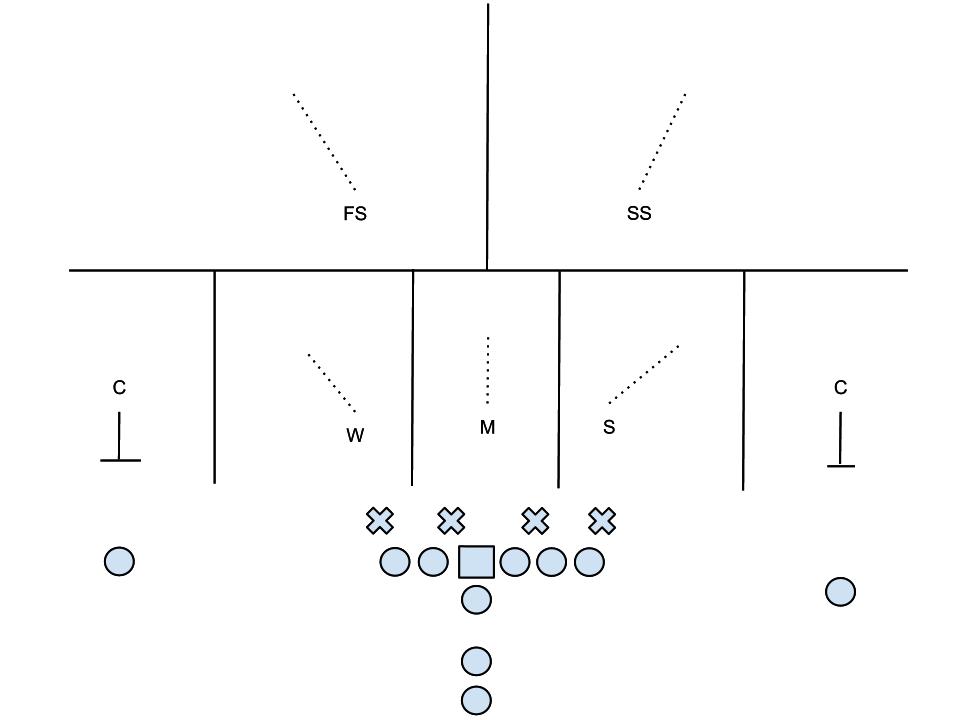 In traditional zone defenses, each defender is responsible for a particular area of the field. At the snap, once the defender determines that the play is a pass, they will drop to the center of their zone and read the quarterback while watching for receivers entering their zone. This is referred to as a landmark drop, because the defender is focused on getting to his landmark, and defending the area around it. The problem with this type of defense is that offensive coaches and quarterbacks have become very adept at exploiting the windows created by these landmark drops. 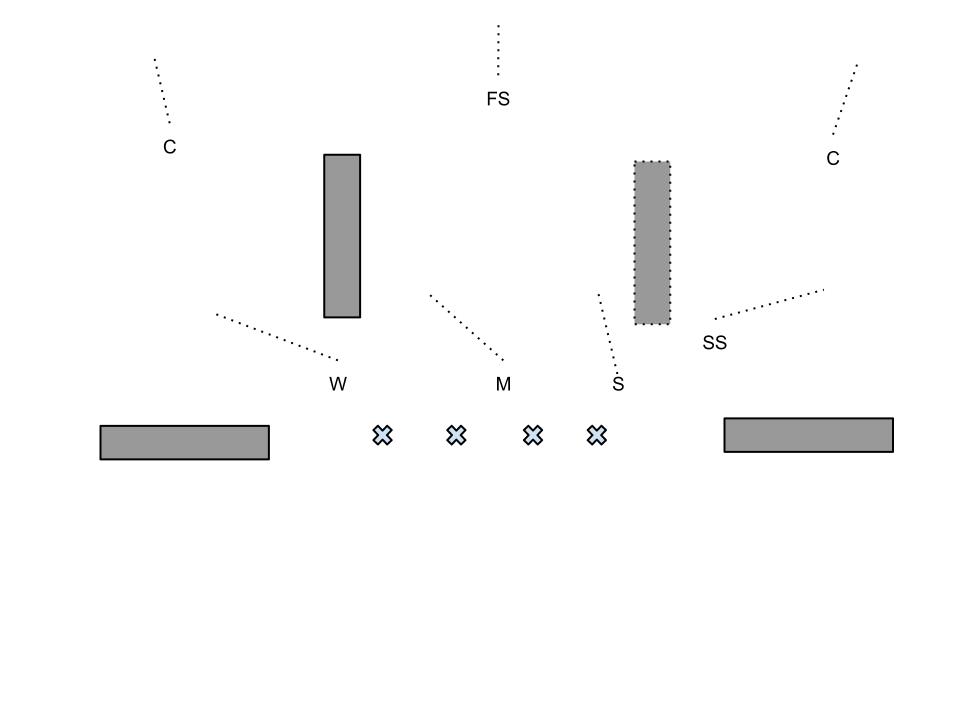 In a typical Cover 3 zone, for example, the seams and flats are known weak spots that a well schooled quarterback is going to attack as soon as he identifies the coverage. So how does a pattern matching zone go about mitigating some of these weaknesses?

First and foremost, pattern matching is an inherently more aggressive approach than landmark drops. Defenders are taught to aggressively "find work", rather than retreating and waiting for receivers to enter their zone. Defenders are covering receivers instead of grass. While pattern reading is employed in the context of zone defense, it can in some ways be thought of as a man-to-man defense except that each defender's assignment is determined after the pattern distribution, rather than by where they line up before the snap. At first blush it may seem an impossible task for the defense to be ready for every possible pass pattern that a team can throw at them, but the truth is that there are a limited number of ways to distribute 2-3 receivers to a given side of the field. There are as many different receiver routes as offensive coordinators can imagine, but ultimately these are only different ways to get to a given spot on the field. The pattern matching defender is only concerned with the distribution of the receivers after the pattern has developed, not how they get there. Let's look at how this works against a typical west coast offense concept. 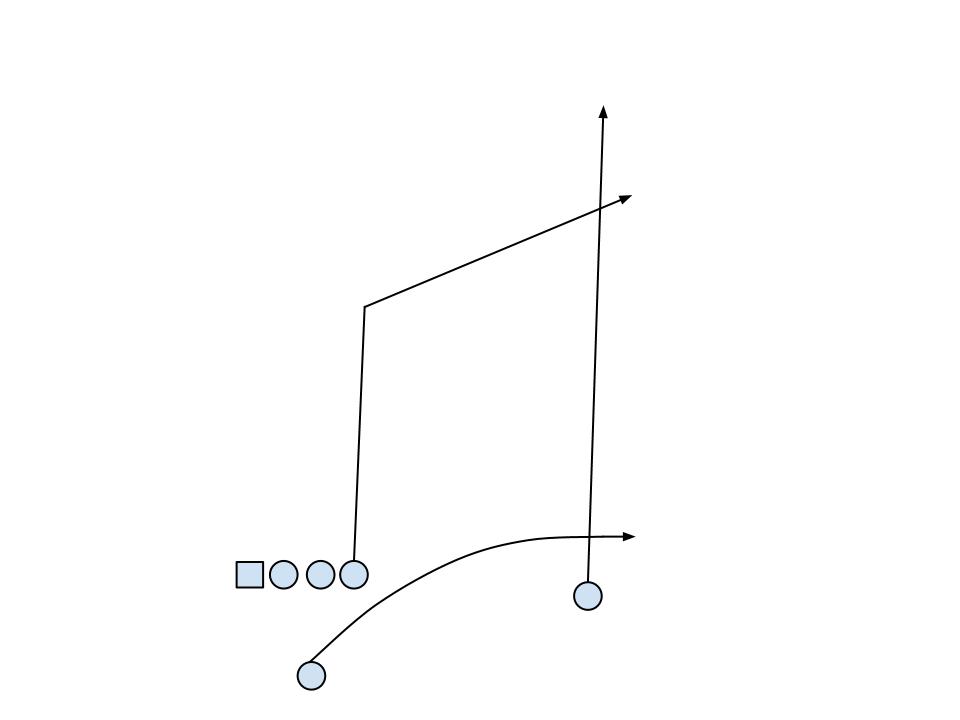 This is pattern is known as "Y sail" and is a very common pro-style concept employed against 2 and 3-deep coverages. The goal is for the vertical route by the outside receiver to carry the deep zone defender out of the play and create room for the tight end's corner route to come open underneath. How would a pattern matching defense handle this pass concept? 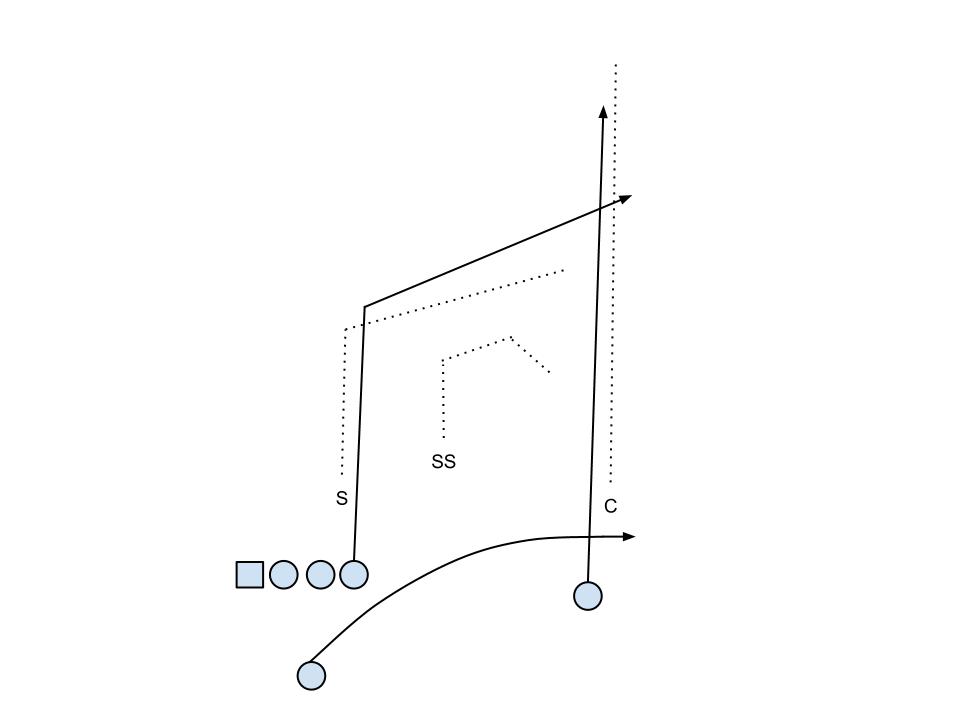 Let's break it down by each of defender's responsibility. The corner (C) has deep third responsibility, and lots of help inside, so his job is to maintain outside leverage and over the top of the vertical receiver. Note that despite being a deep defender the corner is in a press alignment. This is a hallmark of Saban defenses as they will press on the outside regardless of the coverage. The strong safety (SS) will initially drop into the seam rather than towards the center of his zone, so he is immediately taking away one of the traditional weak points of a Cover 3 zone. As the tight end makes his break, the strong safety will get width underneath the corner route and then finally get his eyes down to the flat as the flat route develops. The sam linebacker (S) will carry the tight end vertically until he breaks outside, at which point he will cut under it and get into the passing lane.

The pattern matching zone defense has created problems for the offense in several ways. First, because the defenders haven't taken typical landmark drops, they have created some doubt in the quarterback's mind as to what kind of coverage he is facing. Second, if the QB does recognize Cover 3, the weakness in the seam he would normally expect doesn't exist because of the strong safety's initial drop. Third, the windows in the zone are much smaller because the defenders are finding work and getting on the receivers immediately rather than dropping to a spot and waiting for the receivers to come to them.

So, what's the downside? Well, in this example, the back in the flat will actually be more open than he would against a traditional zone because of the way the strong safety is reacting to the vertical routes. Every defense has weaknesses, but by using pattern reading techniques the defense has dictated the offense's choice and left open the receiver who will do the least damage. This is a smart tradeoff particularly in the college game as there are not many offenses and quarterbacks who will consistently take the easy short gain.

In the larger sense, the biggest drawback to installing this type of defense is the difficulty in teaching these concepts effectively to the point where the defenders are able to play fast without hesitation. While there may only be 8-10 basic patterns to learn, the rules are different for strong and weak side defenders and for each coverage you employ. That starts to add up quickly, especially if you want your players to be versatile and play multiple positions. It has been said truthfully that Saban's genius as a coach is not in his schemes, but his ability to teach them to college players. Defensive coordinator Jeremy Pruitt's challenge will be to usher his players along the path to pattern matching wisdom without robbing them of the ability to play fast and instinctively.