Day 2 of Florida State's Jimbo Fisher football camp is in the books, and Tomahawk Nation has all of your recruiting updates thanks to our team of Stephen Fenech, Spencer Wills and Kasey Dixon. As always, I'll break it down by position for organizational purposes. Please feel free to ask any questions you may have.

The question entering the camp was whether FSU could get the South Florida players up -- something that did not happen in June. The question has been answered, and it's a definite yes. Booker T. and Miami Central, the two South Florida powerhouses who were notably absent in June showed up in force, and Central brought 18 players. Members of Miami Northwestern, Southridge and St. Thomas Aquinas also made the trip.

Chad Thomas, of Miami Booker T. Washington was in attendance, and was great. FSU's coaches and players were all over him. Earlier, I posted a video of him dominating and putting a 2015 tackle on his ass. I spoke with Thomas after the camp.

"Coach Sunseri is a great coach. He taught us a lot in a little bit of time," Thomas said. Thomas explained that Sunseri gets after it, and wants everything done right, even the small things. Thomas appreciated that Sunseri would show how the drill was done, and aggressively showed how to do it right in positioning Thomas.

"It was nice," Thomas said of Florida State.

"I thought about it. It made me think," Thomas said of Harris' commitment to FSU.

Thomas is an excellent trombone player, and actually attends the New World School in Miami for music. Since the New World School doesn't have football, Thomas plays for Booker T. Because of this, a strong music school and program could be a major factor in his recruitment.

Thomas claims no leaders. He did enjoy his recent visits to Alabama and Miami as well. Thomas was impressed by Alabama's campus and facilities. Alabama extended an offer to Thomas, which shows his ability to play rush linebacker as well as defensive end. Thomas also described Miami as "nice," which is what he had to say about Florida State.

Distance won't be a huge factor in Thomas' decision, which will come in January, but he doesn't want to go too far from home, and will stay in the Southeast.

Garrett Wiliams, of the First Academy in Orlando is an impressive player as a 2015 recruit. He's 6'4 and about 225 pounds, and also plays tight end. He spoke with Spencer Wills.

On the Campus and the coaches:

"I love it here, the coaches are phenomenal"

Being recruited as both a TE and a DE currently, depends on how he develops physically over the next few years, but he prefers defensive end.

What he looks for in a school:

"School wise, an environment I can fit into, definitely need the presence of a Christian family on campus. Football wise, a system that I fit well into and coaches that I can work well with."

FSU commitment Demarcus Christmas was dominant in 1-on-1 reps. He really doesn't seem to like interviews too much. Interview recap: He's committed, he's working hard and is in great shape, he's not going to enroll early, and he really enjoyed working with O'Dell Haggins, and knows that Haggins puts a lot of players into the NFL. 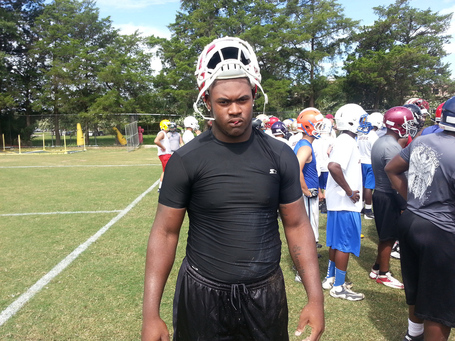 Christmas was actually happy to take the picture.

Darius Smalls, who I covered yesterday, was again good. He's just so overweight right now, and it hinders his ability to show how good he can be. He's a 2015 DT from Jacksonville Sandalwood.

FSU commitments Kain Daub and Jacob Pugh were the top two prospects. Both are total studs. Pugh just keeps getting bigger (235 pounds), but is keeping his athleticism. It's scary. Really scary. Pugh also played some tight end Thursday, and dominated. He is way too big and fast for anyone at the camp. FSU commit Delvin Purifoy was also attending, but didn't work out. He is well put together.

FSU is very set at linebacker, and I am unsure if it will take another.

Kendarius Webster, an FSU CB target out of Georgia did show up, but didn't work out. He's very good, and FSU does have a shot, but will battle Ole Miss and Georgia.

Kendall Sawyer again worked out. I remain unconvinced that he is a take for FSU at this time.

I do not expect FSU to offer Nigel Bethel (formerly Nigel Patten), of Booker T. FSU is loaded at corner, and Bethel is not that big. Similarly, Clearwater Countryside's Mike Johnson is a good player, but I do not see his offer becoming committable anytime soon. Johnson and Bethel are both undersized, and I don't think they are so talented as to necessitate the FSU staff overlooking the lack of size.

Deion Singleton, of Godby, is a corner/safety, and while he's not likely FSU quality, showed well Thursday in coverage, according to Stephen Fenech.