Just what was the driver of the Lexus doing? She explains.

Share All sharing options for: Driver of Lexus in Nick O'Leary's motorcycle crash gives her side of the story

By now, you've probably seen the video of Nick O'Leary, the grandson of Jack Nicklaus, crashing his motorcycle as a Lexus pulled out in front of him. The video is below, and the story is available here. Amazingly, O'Leary did not sustain serious injury and is fully expected to start for Florida State this year at tight end.

Friday, I was contacted by the driver of the Lexus, Schadee Andre, the driver cited with causation of the crash. She wanted to give her side of the story, which differs from the crash report. Initially, she contacted me via twitter (the following are her tweets to me).

@_GoldeeLocks 41m @TomahawkNation this video doesn' show the full story behind what happened. As the driver of the lexus I'd be happy to explain the situation

@_GoldeeLocks 40m @TomahawkNation Nick O' Leary was equally at fault for the accident which is why BOTH insurance companies had to pay for the damages.

@_GoldeeLocks 38m @TomahawkNation The road that Nick 'O Leary was speeding on was a 30 mph residential street and he was going at least 80, to start..

I asked her to email me instead, because the matter wasn't really suited for twitter. Here is her initial email, unedited. Remember, these statements are opinions of one party involved, and are not necessarily factual.

The kid on the bus was my neighbor and was going to his new apartment so I gave him my FSU card so that he wouldn't have to pay to ride. He put his bike on the front rack and tried to use the card while my boyfriend, daughter and I were in the car waiting (to see if it would work) once we realized he was getting off I proceeded to make the turn (after looking both ways, of course). The video doesn't show my boyfriends arm out the window with a dollar to give to our neighbor so he could pay; so instead of turning fast to drive, I was turning slowly in order to stop in front of the bus. Now, on this road in Tallahassee (Mission road) there's a curve and a small hill. I believe that when I looked left, mr. O' Leary was coming up that hill which is why he wasn't seen. He was speeding because if you look closely at the video you can see him try to apply his front brakes which causes the back wheel to rise a little. If he were to be going the posted speed limit, 30 mph, I believe the accident could have been avoided. I wasn't the only one who didn't see him coming, the bus driver even admits that "he came out of nowhere". Although I was cited, it was simply because he had the right of way because I was not fully established in the lane going east. But the insurance company stated that just because a person is cited doesn't mean that they are at fault. Both our insurances covered the costs of the accident and my insurance is currently in the process of getting a percentage of my deductible back from mr. O' leary's insurance company. I am not and have never been an unsafe driver. That is my first accident and with my family being in the car, the last thing I would be is reckless. It is nothing short of a miracle that he survived.

I am in no way trying to play the blame game and I would have been traumatized if mr. O' Leary suffered extensive injuries but I can see where we are both at fault. I should have taken extra caution and he should not have been speeding. I learned from this accident and I'm sure that he has to

This does answer why she was pulling out into the middle of the road. But it also raises several questions. Her answers follow in block quotes.

I wanted to know how she arrived at the determination that O'Leary was traveling 80 MPH, which she claimed in her tweet to me, particularly when the crash report obtained by TomahawkNation.com did not calculate an accurate speed.

Well it's near impossible to prove his speed limit. There's a radar on that road but I can't see it from where I'm from. If you were there, it would have been apparent. 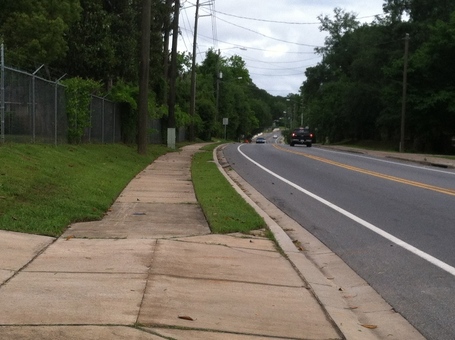 I also wanted to know why she thought that both insurance companies paying meant that they were both at fault.

Insurance companies do their own investigation to determine who is at fault for accidents. I was very upset about bring cited and this was explained to me.

Because she stated that her insurance company was in the process of recouping some of her deductible from O'Leary's insurer, I asked if she knew if O'Leary's insurer was trying to do the same from her insurer.

I would like to respect mr. O' Leary's privacy as well as mine with the insurance companies. People will always have their opinions and can think what they want, but they weren't there. I just wanted to give you both sides of the story.

In the police report, it states that "[The Lexus] was removed from the scene by the owner after he became argumentative and disrespectful after the crash." Is "he" a typo, or a reference to Andre's boyfriend? Who removed the car? What was said between Andre, her boyfriend and the police, etc.?

I reversed my car back into the complex and then a tow truck came to bring it to the auto shop. The "he" in the police report is my boyfriend who was livid (as was I) about being cited. We called our insurance company and the vehicle was towed well after the police left the scene. A tow truck from the city and clean up crew took the motorcycle and bus while the police was there however.

And it was an argument and him pretty much demanding to know why we were cited. He was more upset because our 6 month old daughter was in the car and the outcome could have been worse. He felt that the driver should take some responsibility. But as aforementioned, it's nearly impossible to prove his speed.

What do you think? Let me know in the comments section.