Florida State football kicks off on Labor Day at Pitt. Tomahawk Nation previews the season up until that date by analyzing every key player and other issues facing the 2013 Seminoles.

@TomahawkNation do you thank Dan Hicks stay at DE

Dan Hicks is fully expected to stay at defensive end. In fact, he is listed as a starter.

@TomahawkNation the potential rotation of the d-line.

The question about the defensive line rotation is a very good one. Florida State has 13 defensive linemen who are candidates to receive 100+ snaps this year. That probably won't happen, for a number of reasons, but the battle for snaps will be fascinating.

The biggest question might be JUCO defensive end recruit Desmond Hollin. He has good size at 6'3 and 268 pounds. Is that good weight, however? And how fast can he acclimate to the defense. Hollin will be a player to watch in fall camp.

@TomahawkNation In non nickel situations who will be the 3rd backer and 4th backers?

As of now, Florida State has Telvin Smith and Christian Jones entrenched as starters at WLB and MLB, and Jimbo Fisher said that they will change depending on the situation (sometimes Smith will play MLB, etc.).

But the SLB spot, played last year by the departed Nick Moody (sparingly, as FSU was more often in a nickel set), is up for grabs.

FSU lists red-shirt sophomore Terrance Smith (6'4 220) as the starter, and lists Reggie Northrup (6'1 223) as his backup. Don't be fooled, however, because this is a true position battle. The SLB is asked to cover tight ends and set the edge. Smith's length is good for this, but does he have the strength for it?

Another question is just how many three and four-linebacker sets FSU will play. With some ridiculously talented defensive backs, the Seminoles might be in nickel just as much as they were last season (a lot).

The question of the fourth linebacker implies use of the 3-4 defense. Nobody knows how much 3-4 FSU will play. Certainly it will happen some, and FSU is definitely recruiting to a 3-4 defense, but how much it will be used in 2013 is a major question. There's also the distinct possibility that FSU's "3-4" will be a 3-3-5 alignment with Karlos Williams as the fifth defensive back (three safeties). Williams is bigger than either SLB candidate, so Florida State would not lose much against the run with him in.

Oh, and there is this little matter of freshman Matthew Thomas, one of the best linebacker recruits nationally last year. How quickly will he grasp the defense?

@TomahawkNation How will the added size help/hinder Nick Waisome? 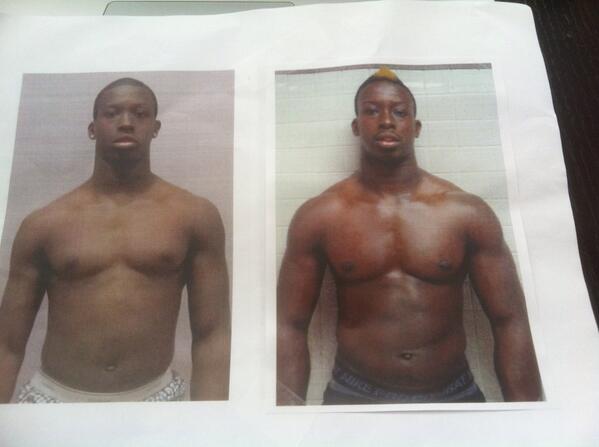 The Waisome question gets at the picture he tweeted. Indeed, Waisome does look bigger, and more cut up. FSU lists him at 5'10 and 176 pounds, which might not be totally accurate, as it listed him last year at 5'10 and 170 pounds. Is Waisome only six pounds bigger? I'll leave that for the comment section.

As for the question, given how much press coverage Florida State wants to play, the answer has to be that it will help. Waisome is significantly bigger in the chest, which is needed to press and jam opposing receivers.

The second corner job is wide open in my opinion, and that includes Darby, who is probably only nominally stuck behind Joyner.

@LordBradIII @TomahawkNation nope. Some people are saying he isn't a true safety but a hybrid. Just want more insight

The picture is not as clear at safety. Senior Terrence Brooks seems to have locked down one safety spot after paying well in 2012.

But the other safety spot is up for grabs between juniors Tyler Hunter and Karlos Williams. Both are fully expected to play a lot, because Florida State will run a lot of defenses featuring five defensive backs (see above).

So the question really boils down to how often will Williams or Hunter be on the field when Florida State is using only five defensive backs (even if this doesn't happen often). Hunter has better coverage skills, being a former cornerback, but Williams is an athletic freak and is perhaps better against the run.

New defensive coordinator Jeremy Pruitt has to be over the moon at the prospect of being able to play exotic defenses and drop down guys like Joyner to play (and blitz from) the slot, or sliding down Williams to have the defense still be very solid against the run while playing extra defensive backs.

At this point, the answers to this aren't really know. We just know that the defense is talented.

@TomahawkNation is our punter going to be better? Beatty cost us a lot of yards on field position.

This is a huge question, as FSU's field position advantage plummeted in 2013 thanks in large part to Beatty (also thanks to multiple dropped punts). We'll be sure to ask Beatty about his off-season work at media day on the 11th. It may be that he needs to boom the ball and not try to place it with such hangtime. That approach, however, is dangerous and sets up FSU for big returns against (see Roberson's return in the Florida game).

The other question will be who returns punts and kicks? Kenny Shaw was dependable at returning punts later in the year, but other candidates will surely emerge. And will Karlos Williams and Lamarcus Joyner continue to return kicks? Where does Levonte Whitfield, a major speedster, fit in to the equation?

@TomahawkNation When grades come out are we losing anyone?

This is always a question entering the year. As of now, I am not aware of any significant grades risk. Fisher will surely address the issue in Tuesday's press conference.

@TomahawkNation Who is going to get significant PT that nobody is talking about?

There might not be one. But I guarantee that if we thought there would be one, we'd be talking about him.

@TomahawkNation the most important position battle?

This is interesting. I'll go with quarterback, because it's the most important position on the field. But reserve defensive end is also a good choice.