The 2014 Class will be enshrined into the Pro Football Hall of Fame on Aug. 2

Both Brooks and Jones were selected in their first year of eligibility and were joined by Ray Guy, Claude Humphrey, Andre Reed, Michael Strahan and Aeneas Williams. 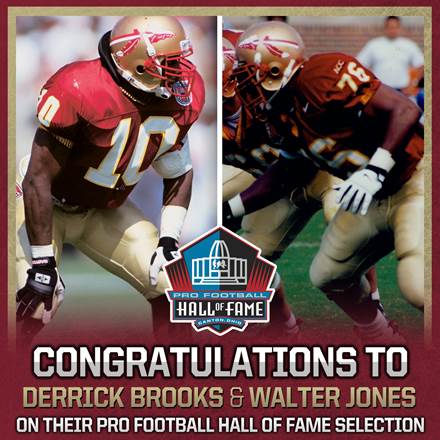 Brooks was a two-time consensus All-American linebacker for the Seminoles. He starred at FSU from 1991-94 and led Florida State to its first national title in 1993. He was a finalist for the Butkus, Lombardi and Football Writer's Defensive Player of the Year Award in 1993 and 1994.

Brooks had a dominant 14-year NFL career with the Tampa Bay Buccaneers from 1995-2008. He is the Buccaneers' all-time leading tackler and was voted to 10 consecutive Pro Bowls (11 total). Brooks made 200 consecutive starts. He led Tampa Bay to the Super Bowl Championship and was named the NFL's Defensive Player of the Year in 2002.

Off the field, Brooks received numerous awards, including the 2000 Walter Payton/NFL Man of the Year Award and was a member of the Florida State University Board of Trustees.

Jones attended Holmes Community College in Mississippi before coming to FSU in 1995. Following a redshirt season, Jones dominated the competition at the left tackle position and led FSU to an 11-1 record in 1996. He surrendered just one sack the entire season and was selected as a Second Team All-American by the Associated Press.

The 6-5, 300-pounder was the sixth overall pick in the 1997 NFL draft and started at left tackle for the next 12 seasons for the Seattle Seahawks from 1997-2008. He became the first Seahawk offensive lineman to be named to a Pro Bowl in 1999 and was selected to the all-star game nine times. He as a six-time All-Pro selection.

The selection of Brooks and Jones for Canton gives Florida State four members of the Pro Football Hall of Fame. Deion Sanders was elected in 2011 and Fred Biletnikoff was selected in 1988.

Brooks and Jones are the 10th pair of players from the same college elected to the same Hall of Fame Class.

The Seminole duo joins San Francisco's Gino Marchetti and Ollie Matson (1972) as the only pair of first-ballot Hall of Famers from the same class who attended the same college.